Nicholas Kristof makes a provocative statement in this morning's NY Times. It has put the cat among the pigeons. He says: "What the world's most impoverished people need isn't fewer sweatshops, but more of them."

What's a kind-hearted liberal like him doing protesting ethical trading and labor standards? What's wrong with consumers being willing to pay more for products from factories and farms certified to the SA8000 decent work standard or to Ethical Trading standards? In a British airport or train station, it's hard to buy coffee that is not promoted as ethically traded. 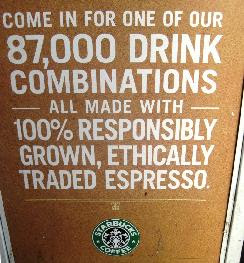 He fears that the anti-sweatshop cause is being used a smokescreen for protectionist trade policies.

The Obama-Biden campaign website did promise to “fight for a trade policy that opens up foreign markets to support good American jobs [and] spread[s] good labor and environmental standards around the world.”

But it takes some work to read higher labor and environmental standards as protectionism. The fact is, factory jobs are being lost both in the United States and overseas because the harsh realities of unprecedented asset deflation. With half of their retirement savings gone, many Americans only have change left, and not much of that to spare.

It's surely unfair to condemn multinationals for seeking to comply with the labor laws of the countries where they operate or buy goods. Is it unfair for the United States to ask the governments of developing countries to do more to enforce their own local labor laws? What's wrong with brands giving preference in their buying to factories to abide by labor standards?

In fact higher labor standards have significant benefits for companies that embrace them. Better workplaces in developing countries have higher retention and productivity rates, fewer rejects and better quality goods. The jobs that these standards protect are the jobs in these factories and farms.