WHY POSTS HERE ARE STOPPING UNTIL FURTHER NOTICE

...for now. Your blogger is in Washington, D.C., serving as Senior Economist on the staff of the Vice Chair of the Joint Economic Committee of the Congress. Contact him at  John_Tepper_Marlin@jec.senate.gov.
Posted by John Tepper Marlin at 7:59 AM 1 comment: Links to this post

On Long Island, NY for middle-income folk, tax refunds are not matching expectations. The cap on state and local taxes (SALT), including both property taxes and income taxes (or sales taxes in states with no state or local income tax) is taking away the benefits of tax cuts on incomes for many taxpayers. The most-affected states by the cap on SALT deductibility are New York, Connecticut, New Jersey and California, in that order. Beware the Ides of April, i.e., April 15.

Comparing federal taxes paid on 2018 income with taxes paid on 2017 income, here are some early numbers. Please send any figures you have, or find online, to john@cityeconomist.com and I will add them. If you can't remember your prior-year tax bills, you can get them here from the IRS: https://bit.ly/2WMgpuG. 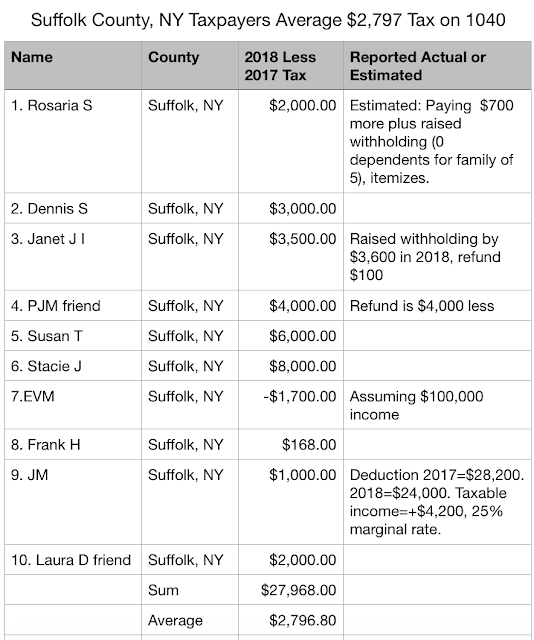 Posted by John Tepper Marlin at 6:54 PM No comments: Links to this post

January 27, 2019–Today we had the fourth annual Florida meeting of the Former Office of the Comptroller Employees Association, which goes by the name of FOCEA.

Eric Wollman (in the Kingsborough Community College shirt, not to be confused with the Kansas City Chiefs) has joined Steve Newman and John Tepper Marlin in retirement from the Office of the Comptroller. Eric wondered whether he should retire the FOCEA name. No, we said.

We talked about how hard it was to figure out 2018 taxes, and how some people in New York, New Jersey and Connecticut are going to be (or already are) nastily surprised by the impact of the anti-blue-state cap of $10,000 on state and local taxes in the Tax Cuts and Jobs Act of December 2017. There has long been a steady stream of retirees to Florida and this will encourage the flow.

Housing policy has been a bedrock issue for Rep. Maxine Waters since the beginning of her tenure in Congress and is high on the agenda of the 116th Congress House Financial Services Committee. The 115th Congress grappled with several ongoing issues in housing policy, such as rental assistance, Native American housing programs, and disaster response, but it did not successfully resolve anything in the area of housing affordability.

Last Congress, Rep. Waters focused on protecting the Community Reinvestment Act (CRA), designed to prevent discriminatory credit practices and guarantee fair housing protections. Waters also introduced a number of housing bills last Congress including:
Looking ahead to this Congress, Waters has renamed the Housing and Insurance Subcommittee as Housing and Community Development, highlighting her commitment to affordable housing and the CRA. We can expect much of the Committee’s legislative activity on housing to take place in this revamped Subcommittee.

With Republicans in control of the Senate, there is little hope for meaningful bipartisan housing legislation this Congress. Sen. Sherrod Brown, ranking member of the Senate Banking Committee, has expressed a commitment to housing reform, so there may be discussion within SBC on the issue. Sadly, any legislation coming from the House is unlikely to pass in the Senate.

Rep. Waters will be leading the affordable housing agenda on House Financial Services, assisted by a number of new HFSC members that are likely be prominent advocates:
Asymmetric Affordability

As with many economic issues, there are social inequities within the affordable housing dilemma. A 2018 Urban Institute report showed the millennial homeownership rate approximately 8 points lower than that of Gen Xers and Baby Boomers at the same age. Many millennials are waiting to buy a home due to rising home prices, stagnating wages, and high levels of household debt. [The financial meltdown of 2007-08 contributed to this situation, resulting in many foreclosures and more restrictive borrowing standards. –JTM]

Low-income families are especially affected by the affordable-housing crisis. A national survey conducted by the Low Income Housing Coalition (LIHC) found that a worker earning the state minimum wage could afford a market-rate one-bedroom apartment in only 22 of the country’s 3,000 counties. There is a growing crisis stemming from lack of affordable housing options to low-income earners. Per a March 2018 LIHC Report, the US has a deficit of 7.2 million affordable rental homes to extremely low-income renters.

Homeownership has long been a core element of the American Dream, but it’s becoming increasingly unattainable. The problem is especially bad for minorities, low-income families, and younger Americans and is likely to get play not only in HSFC, but on the 2020 campaign trail.

Despite the efforts of champions in the House, such as Rep. Maxine Waters, it has been very difficult to pass any legislation addressing affordable housing. With Rep. Waters at the helm of HFSC, we will definitely see more discussion in this area. Even if the Republican Senate deters real progress, proposals originated in the 116th will serve as an important legislative precedent for 2020 and beyond.
Posted by John Tepper Marlin at 2:32 PM No comments: Links to this post

The following is posted, with his permission, from an email by Dana Chasin.
WASHINGTON, D.C., January 15, 2019 – Per a report by S&P Global Ratings, the US economy has lost $3.6 billion since the beginning of the shutdown on December 22. Original estimates by President Trump’s chief economist, Kevin Hassett, put the damage to the economy at $1.2 billion each week the shutdown continues. The Trump administration has since doubled its damage estimate to the economy, estimating today that the shutdown results in a GDP loss of $2.4 billion — 0.1 percent off the annual holiday growth rate — each week of the shutdown.

The loss in GDP growth results partly from the loss of government work hours and partly from the decline in spending by unpaid federal employees. To the extent they depend on federal contracts, private contractors are also without work during the shutdown, amplifying the effects for the wider economy. Ironically, if the shutdown continues for another two weeks, the amount shaved off US GDP would be equivalent to the amount requested by the president for the border wall.

The shutdown comes as doubts are raised about the strength of the US economy. A protracted shutdown is occurring at a time when there are ongoing trade negotiations with China, concerning indicators in the housing and leveraged loans markets, slowing global growth, and concerns over Fed rate hikes and quantitative tightening.

While the 800,000 furloughed federal employees are expected to get back pay [the President on January 16 signed a commitment to that effect – https://federalnewsnetwork.com/government-shutdown/2019/01/trump-signs-bill-ensuring-federal-employees-get-paid-after-government-shutdown/ –JTM], many contractors, like janitors and cafeteria staff, typically get no such protection. There is no official source tracking the number of current federal contractors, but Paul Light, a professor at New York University, estimates there are over 4 million contractors and grant recipients affected by the shutdown. In a letter on Thursday, January 10, 34 Democratic Senators implored OMB to grant back pay for low- and middle-income contractor employees.

The Senate Appropriations Committee estimates that in addition to the 420,000 federal employees that have to work without pay, 380,000 are furloughed — meaning they are sent home without pay. According to the American Federation of Government Employees, a labor union that represents about 700,000 workers, while some government employees make six-figure salaries, the average weekly salary of a government employee is only about $500.

Low- and middle-income workers and families directly affected by the shutdown, some of whom will not end up receiving back-pay, compensate for the lack of paychecks by collecting unemployment, dipping into or draining savings accounts, turning off the heat in their homes, borrowing money from friends or family, or taking out small commercial loans. Some areas of the country are harder hit than others; over the past three weeks, Washington, D.C. saw the highest level of jobless claims in six years.

If the shutdown continues much longer, mounting late fees, defaults, evictions, and foreclosures are significant, dangerous, and very real prospects for many federal workers and contractors. The knock-on effects of individuals not participating in the wider economy will also soon become noticeable.

The direct economic impact on furloughed federal workers is obvious, but the shutdown is also creating headaches for workers and businesses in a number of indirect ways, as various federal agencies are working with limited capacity:
Light at the End of the Tunnel?

With Democrats standing united in opposition to wall funding, President Trump has few options on the table. The most obvious (but perhaps least likely) solution to the shutdown would be compromise. Democratic leadership has put forward a two-bill proposal to address the situation. The first bill, H.R. 21, would fund all agencies outside of the Department of Homeland Security (DHS) through the fiscal year, while the second, H.J. Res.1, would extend current DHS funding through February 8. The additional month provides a window for ongoing border wall negotiations, allowing the rest of the government to reopen. Both passed the House by a near party-line vote last week.

Trump has repeatedly shot down this proposal, claiming he will accept nothing short of the requested $5.7 billion in wall funding upfront.

As the partial shutdown drags through the winter, Trump seems as committed to brinkmanship as ever. A protracted shutdown bears out the dysfunctional government proponents’ self-fulfilling prophecy. Many voters ascribe to the view that a shutdown is a pox on both Democratic and Republican houses. Although polling suggests most voters blame the president for the shutdown, the president’s support among his base appears to remain strong and gaining marginally. Pressure on some Senate Republicans is mounting — let’s see when it becomes enough for them to break rank and try to persuade the president to end the longest shutdown in US history. In the meantime, as the president puts it, federal employees “on the receiving end will make adjustments.”

Other recent stories about the impact of the shutdown:

New York Magazine Intelligencer: http://nymag.com/intelligencer/2019/01/the-longer-the-shutdown-lasts-the-more-it-hurts-the-economy.html This story calls all of the unpaid workers "furloughed", not the definition used by GovExec..

It's Official: Furloughed Feds Will Receive Back Pay Once the Shutdown Ends // GovExec Staff. President Trump on Wednesday signed into law a bill that guarantees about 350,000 furloughed federal employees back pay once the partial shutdown ends. This source restricts the term "furloughed" to workers who are told not to come into work, as opposed to those working without pay, who are called "excepted" or "exempted".

Letter from Federation of American Scientists on the cost of the shutdown to science: https://mailchi.mp/fas/2019-government-shutdown. Same message as story in NY Times on the impact of the shutdown on scientific research on January 16.
Posted by John Tepper Marlin at 2:32 PM No comments: Links to this post