FDR this day signed the Beer and Wine Revenue Act, which made sales of beer and wine legal under federal law, but imposed a tax on such sales.

This was an important shift, from prohibition of alcohol to taxation of it. The tax was called America's first "sin tax" but tax policy experts today refer to a tax on luxury goods that many disapprove of as "Pigou" taxes.

Named after Cambridge University economist Arthur Cecil Pigou (1877-1959), a Pigou tax is intended to reduce the amount people consume of the good. At the same time, if the tax is enforced, it raises revenue for government programs.

This was a win-win for FDR.

He raised money for his New Deal programs to generate jobs at a time when the unemployment rate was 25 percent, at the same time as he could tell temperance supporters that he was discouraging beer and wine sales by making them more expensive. For beer fans he was a hero because he made beer and wine legal (up to 3.2 percent alcohol), undercutting the illegal establishments that sprang up under Prohibition (as many as 100,000 "speak-easies" operated in New York City alone). Collecting taxes on alcohol was much less costly than trying to track down illegal sales during the Prohibition era, so FDR saved his Treasury Secretary, Will Woodin, some money in this area.

Temperance advocates had long sought prohibition of sale of alcohol and they succeeded in 1919 with passage of the 18th Amendment and its accompanying Volstead Act. One argument against women getting the vote had been that more women would mean more votes for Prohibition. One reason that the 19th Amendment, recognizing women's right to vote throughout the United States, was passed in 1920 was that the fear of Prohibition became a reality without universal woman's suffrage.

Prohibition forbade manufacture, sale or transporting of liquor, i.e., any beverage with more than 0.5 percent alcohol by volume. Prohibition was found not to cut down on consumption while depriving government of tax revenue and imposing heavy enforcement costs. Prohibition was repealed in December 1933 by passage of the 21st Amendment.
Posted by John Tepper Marlin at 9:27 AM No comments: Links to this post

On this day in 1933, eight days after his inauguration, President Franklin D. Roosevelt gave his first national radio address or “fireside chat,” broadcast directly from the White House.

FDR began his first address with the words: “I want to talk for a few minutes with the people of the United States about banking.”

He had told his lifelong-GOP Secretary of the Treasury, Will Woodin, that he didn't want to be bothered with the details of the solution to the bank panic because he was going to concentrate on communicating the resolution to the public. This was a disappointment to Columbia Prof. Raymond Moley, who was serving as FDR's adviser on the banking crisis and wanted to consult with FDR at every point, but Woodin went right to work.

The Friday before FDR's inauguration, most banks had already been closed because so many states had initiated their own bank holidays, to give the banks some breathing room as depositors were lining up to withdraw all their money (outgoing President Hoover wouldn't act without FDR's agreement, and FDR's position was that he was not going to become President until March 4).

The scene of panic throughout the banking system was shown vividly in Frank Capra's movie It's a Wonderful Life (1947), starring Jimmy Stewart as small-town banker George Bailey, who is considering suicide as he sees his depositors destroying his bank, one depositor at a time.

FDR's first act was to announce a Federal bank holiday – i.e., a presidentially ordered closing of the banks – pending examination of all the banks (largest ones first) and the reopening only of the solvent banks. Secretary Woodin knew what to do as a top manager, because he had been Chairman of a locomotive company and President of a railway car manufacturer that in 1928 were two of the 20 companies in the Dow. He started working around the clock as if it were a three-shift factory, pushing government staff to:
Meanwhile, FDR laid the public-communications groundwork for all these steps. In his Fireside Chat he explained the closure of the banks as necessary to stop a surge in withdrawals by panicked depositors. Many banks would be reopening the next day, FDR said, and he thanked Americans for their  “fortitude and good temper” during the period of the bank holidays.

When FDR took office, the United States was suffering the highest rate of unemployment, with between one-fourth and one-third of workers being unemployed.

The Fireside Chat got its name from radio journalist Robert (Bob) Trout, who was called "the Iron Man of Radio" for his ability to keep talking during a breaking news story. FDR's purpose was to inspire confidence in himself and in the nonfunctioning banking system. While the chats sound folksy, FDR took great pains to make them that way, using simple vocabulary and anecdotes. Presidents had previously communicated with their citizens almost exclusively through journalists. The Fireside Chats were without precedent and they were effective because radios were still magical and were owned by 90 percent of U.S. households.
Posted by John Tepper Marlin at 6:19 AM No comments: Links to this post

My G+1 Google counter shows page views for my blogs passed one million on March 9.

We discussed the Indian River and County and Vero Beach economies. 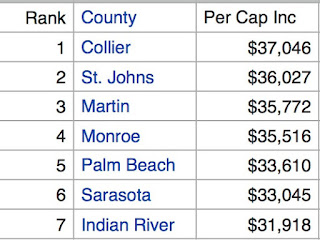 Narrowing down to zip codes, Indian River County includes one of the wealthiest zip codes in the United States (32963, the Barrier Island of Vero Beach, traversed from top to bottom by State Road A1A).

IRS data on Adjusted Gross Income and Income per Return are available for 199 Florida zip codes.

But some of the zip codes cover are enclaves–with a small number of individuals and don't constitute real communities.

So in reviewing Florida's zip codes, we start by deleting those with fewer than 100 tax returns. That gives us the following 25 highest-income zip codes:


How does this play out in Vero Beach?

The Indian River Library is an indicator of the importance of being a wealthy community. It has benefited not only from the county's strong tax base but also from significant gifts that increase the library's usefulness to its patrons:
At the end of the last century the library was first or second in Florida in per capita attendance at adult programs and new borrowers.  This may account for the three negative reviews on Yelp of the library's services in 2013 and 2015 in comparison with, for example, the County Library branch at Sebastian. But one goes to a library primarily to look for books and other documents, and secondarily for the services of the staff, so it might be a good trade to go to the busier library even though the staff may be busier and less generous with their time than in a library with fewer books and patrons.

St. Edward's School – and the Classical Orchestra that performs there – is another gem in Vero Beach.

The Vero Art Museum and the Riverside Theater are two more institutions that are astonishingly vigorous for such a small community.

The Indian River Medical Center his attracting talented doctors in a variety of fields. The Vero Beach Regional Airport is a joy to use as an alternative to Orlando, West Palm Beach or Melbourne.

New attractions are picking up support like the Indian River Historical Society.

Indian River State College is a community college with some B.A. degree offerings in public service and agricultural fields for which demand for skilled help n the region is high.

The Economic Summit meeting concluded with a general sense of optimism about the county's economy, with a diverse base of supporting institutions and available labor for agricultural, cultural, real estate, retail, medical and sports employers.

The Summit members were, however, concerned that local priorities remain focused on adequate protection of the environmental attractions that draw visitors and retirees to the area. This means controlled growth and aggressive precautions to avoid or prepare for natural and man-made disasters.

Posted by John Tepper Marlin at 10:11 PM No comments: Links to this post 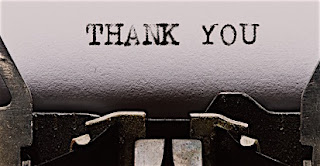 SINCE THE BLOG WAS CREATED

Posted by John Tepper Marlin at 12:44 PM No comments: Links to this post