How Much Must You Give for a White House Invite?

The NY Times today ("White House Welcomes Donors...", Sunday, April 15) had a page 1 story by Mike McIntire and Michael Luo about President Obama's invitations to the White House. Fascinating stuff.
Biggest surprise for me was the degree of White House transparency. The Federal Election Commission (FEC) keeps track of campaign donations (see www.data.gov) and the Executive Office of the President keeps a public log of visits to the White House that is posted on www.data.gov. Inevitably, someone was going to tie these together.

The donation totals are cumulative over three election cycles, i.e., from 2008 through 2012 (first quarter). Surprise (not) - there is a pretty close relationship between how much money you give and the probability of a White House invitation - for this purpose a visit equates to an invitation. The Times story doesn't provide a formula, but here is what I got inputting the numbers from the Times chart - see my chart immediately below. 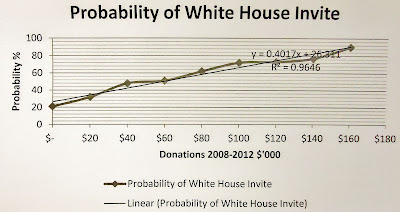 First off, the FEC disclosure reports include gifts of only $200 and above. That excludes many small gifts via the Internet. So there will some invitations to dinner to the Internet givers that wouldn't show up on the FEC reports. The probability at the "zero" gift level is the probability that someone gets a White House invitation after giving only (at least) $200. The probability applies to givers of $200 or more.

Second, the White House visitors' list is hard to navigate for purposes of reconciling the numbers. What rules were followed in deciding who is included from the list of invitees? For example, many overseas visitors show up on the site and they are not permitted to give. Many of visits are labeled as events ("Holiday Party"). Some of the locations to which visitors are invited are strictly public rooms. How was the list narrowed down?

Finally, to draw conclusions that would characterize the Obama White House in any way, would we not need some data from other presidencies? How does the Obama era differ from Bush 43, for example?
Posted by John Tepper Marlin at 12:59 PM No comments:

That's the kind of ripoff that The Credit Card Holders Bill of Rights, signed early in President Obama's presidency, ought to prevent.

Chi Chi Wu, an attorney at the National Consumer Law Center, describes an  example of what is going on:


First Premier [Bank of South Dakota] began charging a $95 processing fee before the card account was opened, as well as a $75 annual fee. Yet the credit limit on the card was $300.

Comments on the Bureau's proposal are due by June 11.

No-call fee. $9.95 a month for no calls from credit card companies.

Unredeemed fee.  For each month you delay redeeming your frequent flyer miles, $19 per 10,000 points.

These fanciful suggestions are unfortunately not much worse that the reality. Banks for quite a few years have been making more money from fees than from interest rates.

Posted by John Tepper Marlin at 4:21 AM No comments:


Numbers just released by the Bureau of Labor Statistics allow us to track the relative economic performance of large counties through the third quarter of 2011. This week for the first time we have the dollars associated with payroll jobs in each area.As a model for understanding the numbers, let's take  the three largest counties - Los Angeles, Cook County and Manhattan (New York County). Los Angeles County has the most jobs - 3.9 million of them, 3.0 percent of all jobs in the United States. Cook County is second with 2.4 million jobs, 1.8 percent of all U.S. jobs. Finally, Manhattan has 2.3 million jobs, 1.8 percent of all U.S. jobs.  The three counties together have 6.6 percent of all U.S. jobs.
The relative size of the largest counties are shown in this BLS chart posted Friday, March 30. Los Angeles County encompasses the City of Los Angeles and Cook County encompasses the City of Chicago. New York City is the only U.S. city that includes more than one county. New York County is coterminous with the Borough of Manhattan, which is not the largest borough by number of residents but includes approximately three-fourths of the Gross City Product.

It is already known that Manhattan grew jobs at the fastest rate, 2.6 percent, during the year ending September 2011. This is a full percentage point faster than the United States as a whole. Cook County was also above the national average for job growth but Los Angeles grew jobs only half as fast as the nation. (See Table 2.)

The question that the new data on average wages help us to answer is - what happened to average salaries in the counties? Did job growth reflect a growth of less-well-paid jobs, or was the job growth occurring in better-paid industries? The average wage in the third quarter of 2011 was $916 a week in the United States and it was $1,647 in Manhattan, $1,047 in Cook County and $1,026 in Los Angeles. (See Table 3.)

If one multiplies the total jobs in Table 1 by the average weekly wage in Table 3, it generates a good first approximation of the relative Gross County Product, i.e., the economic product of people working in each county. This number was the foundation for the NYC Comptroller's Office estimates of New York City's Gross City Product in the 1990s. New York City was the first city to develop Gross City Product estimates, at a time when Gross State Products were not available from the Bureau of Economic Analysis, as they are now.
Finally, we look at how the third-quarter 2011 average wage compares with the same quarter in 2010. This shows wages increasing faster in the rest of the United States. The average wage increase between the third quarter of 2010 and the third quarter of 2011 was 5.3 percent - from a much lower base than in the three largest counties. The Los Angeles County increase was only slightly below the national average, whereas New York County and Cook County wages rose 0.7 and 1.3 percentage points more slowly than the nation. (See Table 4.)

For the nation, the more accurate figure for the change in the wage component of the Gross Product is 7.0%. (See Table 5.)

From the last column in Table 5 we can now answer the question – how have the wage sectors of the three largest counties been performing based on the latest county employment and wage data?
The wage component of the nation’s economy grew 7 percent. The nation was led by New York County, which grew 7.3 percent. The other two counties’ wage economies lagged behind. Wages grew at a faster rate in Los Angeles County than in New York County, but from a very much lower base (as shown in Table 3).
We get a general picture of the relative performance of the county wage economies from the QCEW data. We can then drill down into the industry components to understand which parts of each wage economy are contributing the most. This will be the subject of another post.
Posted by John Tepper Marlin at 7:12 AM No comments: