May 31, 2018 – In its regular emailed newsletter, the book distribution giant Ingram reports that the publishing industry is alive and well, the focus of the attention of several investors with deep pockets.

I was blessed with a copy of the Ingram email because I stopped by their Javits Center booth this morning at BookExpo. Ingram offers a great deal to self-publishers, including hard-cover options in  a variety of sizes.

In support of the thesis that book publishing has a great future, Ingram cites an article from earlier in the month in the Wall Street Journal that names Snap Inc. Chairman, Michael Lynton, billionaire Len Blavatnik, and Ellis Jones, chairman of investment firm Wasserstein & Co., among investors pouring millions of dollars into printed books.

The immediate focus of the WSJ article was the acquisition by Lynton and the investors of the regional publishing company Arcadia, which engages nostalgia buffs by producing collections of high-quality old photographs in heritage books. Arcadia is the largest local-history publishing company in the United States, with 14,000 titles.
Posted by John Tepper Marlin at 6:43 PM No comments:

Posted by John Tepper Marlin at 5:47 PM No comments:

He has made creating jobs a central part of his program, one of the main issues highlighted on his own web site.

He said in 2016 he would go to Washington, work with the Tea Party to reduce environmental and other regulations, and "help grow our economy and create more good paying jobs".

So how's it going with that, Mr. Zeldin?

The growth rate was Point One Percent. That's one-tenth of one percent. That is statistically equivalent to Zero.


Compare that with Brooklyn (King's County), which grew 41 times as fast, 4.1 percent, and ranked 14th out of the 347 largest counties.

Zeldin has had two terms to prove he can make a difference in job growth. I would say he flunks his own test. He has not helped grow the economy. He has not "created more good-paying jobs". Time's up!
Posted by John Tepper Marlin at 8:25 AM No comments: 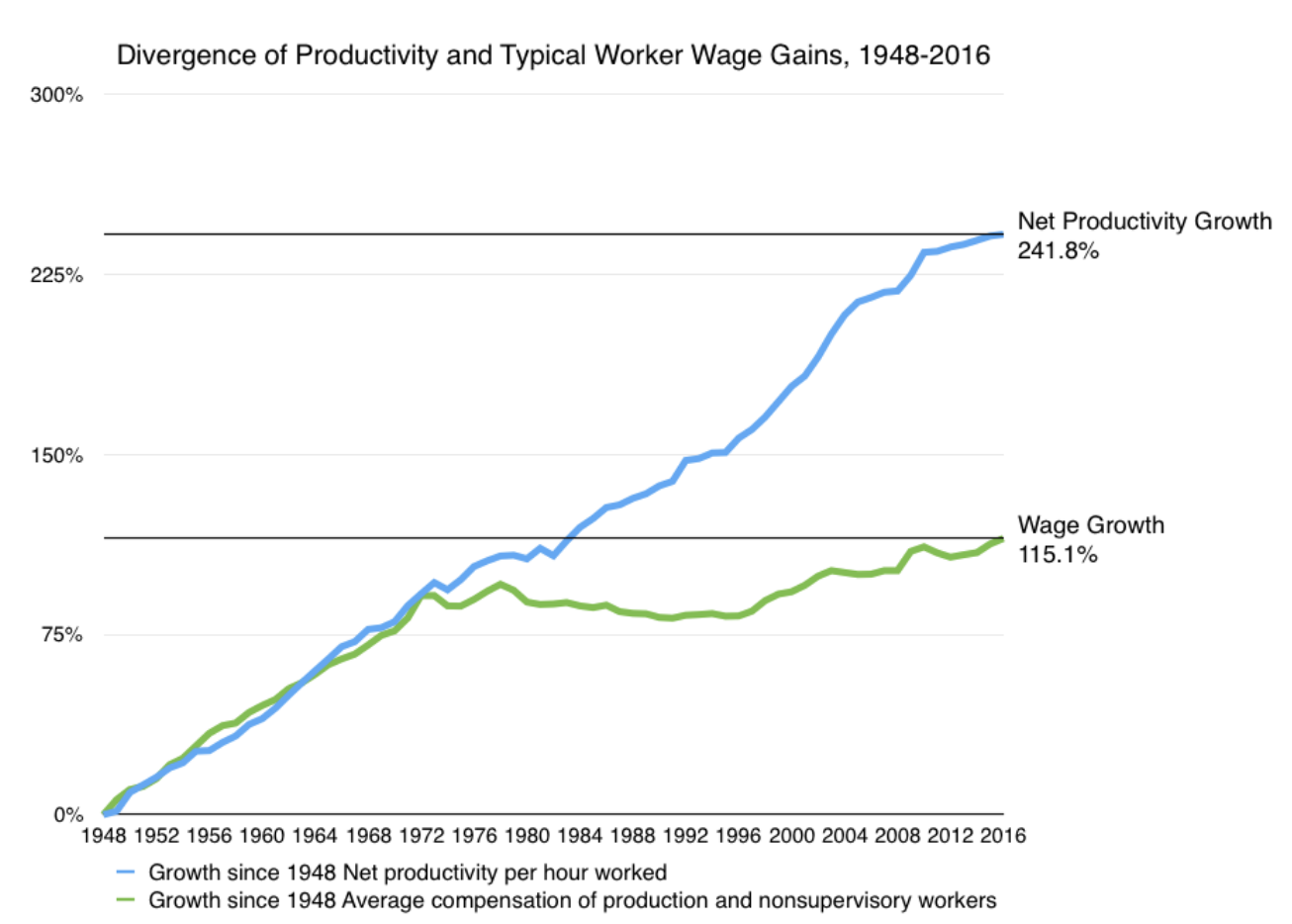 Two months ago, teachers in West Virginia began a statewide strike that would last for weeks.  It would pay off, winning gains for educators who have endured some of the lowest wages and worst benefits in the country. Yet the stuck wages afflicting so many workers stand alongside a 45-year low in new unemployment claims last week.  What explains this disparity? What in fact are the prevailing labor and wage conditions in the country? What are the political implications for November? The following comments are from an email from Dana Chasin, posted here by permission.

Inspired by the efforts in West Virginia, teachers across the country’s low-wage states have initiated job action. Tens of thousands of teachers have walked out across Oklahoma, Arizona, Kentucky, and Colorado to protest low wages, poor benefits, and shrinking education funding.  Tensions are simmering in North Carolina and Mississippi, and calls for action in Texas and Indiana suggest that the wave of teacher strikes is likely far from over.

Americans overwhelmingly support teachers’ demands for higher wages.  Over 50 percent of the country would support higher taxes to raise teachers’ wages.  Perhaps this support is attributable to familiarity. If the grievances that these educators cite to justify labor action sound familiar, that’s because stagnant wages and declining benefits have come to define the American labor market conditions in recent years.
For Most, Stuck Wages
As with red-state teachers, a vast majority of Americans rely on their paychecks and employer-provided benefits to make ends meet, and these have hardly improved in decades.

Between 1950 and 1970, Americans enjoyed a post-war boom that saw wages grow in line with the broader economy.  Economists have long thought that if worker productivity rises, wages will also increase in kind. The three decades after WWII supported this notion.  Over this period, wages rose by 91 percent, almost exactly in step with the 97 percent rate growth in national productivity.
In 2016, American workers were 75 percent more productive than they were in 1973, but had only seen their take home pay rise 12 percent in that time. American workers have seen their share of productivity gains collapse.
Paradox:  Plentiful Work, Slow Wage Growth
President Trump and congressional Republicans say that the stable and historically low unemployment rate is their doing, not that they inherited an economy that saw steady reductions in unemployment for five straight years.
Real wages have been stagnant for even longer, but Trump is not taking credit here.  In many cases even the declines seen in unemployment rates are concentrated predominantly in low-wage, low-quality job sectors.  While the economy has been adding jobs, in many places around the country these jobs tend to pay the minimum wage. Regional differentials in labor markets can also confuse national-level statistics.
A Look Behind The Numbers
Beyond this, while today’s unemployment rate is certainly low, this can obscure real problems in the labor market.
During the Great Recession, the labor force participation rate fell from 67 percent to 63 percent.  Many people fell into underemployment or lost faith in the notion that any opportunities existed for them. The size of the workforce has remained around 63 percent since, suggesting fewer opportunities and a lingering disillusionment among those that have fallen out of the workforce.
The Bureau of Labor Statistics (BLS) quantifies an alternative measure of slack in the labor market that takes the above categories of workers into account. While the unemployment rate (measuring only those seeking jobs within the last four weeks as being unemployed) is 4.1 percent, another measure reveals a more substantial underutilization of the workforce.  When taking into account the workers who are involuntarily part-time, marginally attached workers, and discouraged workers, the U-6 unemployment rate is 8.3 percent today – more than twice that of the conventional measure.
New Ideas About Bargaining Power
There is considerable debate as to why incomes have stagnated for as long as they have. Some theorists see “market-exogenous” changes in technology and globalization to explain the rise of inequality.  In this formulation, advances in shipping and information technologies allowed capital unfettered access to the entire world’s labor supply, causing a shift in production from high wage areas to low wage areas.
More recently, economists and policy thinkers have turned their attention to the role of market power or labor market concentration in wage analysis.  This theory focuses on concentration as a driving factor in wage stagnation. Market concentration accounts for 10-15 percent of annual wage losses, suggesting that workers’ wage bargaining power is weakening in certain robust labor markets.
The last forty years has seen a retreat from policies and institutions that support the relative bargaining power of workers. The decline of American unions is an oft-cited reason for the erosion of workers’ bargaining position vis-a-vis employers, but other factors tether employees to low wages as well, including:
The concentration of labor markets and the collapse of worker power have played an important part in the divergence between labor productivity and wage growth, and can at least partially explain the why wages are hardly responding to very low unemployment rates.
Labor Market Not Monolithic for Midterms
America is comprised of very diverse economies across many regions. While technological changes and shifting market power have depressed employment levels and wages overall, the composition of local economies determine the effect those developments have on a local workforce.  Regional economies with significant vulnerability to trade competition have seen commensurate declines in employment. Those exposed to technological change have undergone a reorganization of the local workforce.  Those that have experienced market consolidation have seen other deleterious effects.
President Trump and Congressional Republicans may try to take credit in the run-up to the November midterm elections for the nation’s continued low unemployment rate.  But their claims will likely fall on deaf ears in communities where trade competition have depressed employment and where laborers have lost negotiation power relative to their employers.  After cutting taxes overwhelmingly for the corporations and the wealthiest, the GOP hasn’t shown many voters yet the benefits they were promised; instead, they continue to struggle with continually stagnant wages and precious few good jobs.  But with all the GOP tax talk, they increasingly perceive another threat to their retirement security, which we will address next time.

To be added to the news digest assembled by Dana Chasin and the 20/20 team, go here.
Posted by John Tepper Marlin at 2:30 PM No comments: