All of her mayoral opponents piled on against her at a meeting she was unable to attend.

Then she pushed through legislation quickly and efficiently.

That is pretty impressive.

The compromise that was reached will give paid sick leave to one million New York City service workers that didn't have it.

For those who think she gave away too much, I say - five days a year, only for companies employing at least 20 people (15 people starting in 2015)? That is not too much. Larger companies and governments routinely allow a day a month for the first year and 15 paid sick days after the first year.

For those who think workers deserve better - of course they do. But New Jersey has zero sick days required of anyone and Connecticut requires nothing of any company hiring fewer than 50 people. The principle that is preoccupying the Supreme Court on DOMA - not being too far ahead of public opinion - also applies to political leadership.

The activists should move their campaigns to neighboring states - if they can move the needle in NJ and CT, come back to NYC!  Here is the NY Times story today
http://nyti.ms/10nfo83.
Posted by John Tepper Marlin at 9:08 AM No comments: 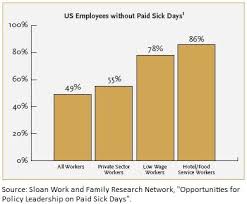 Only about half of U.S.  workers have earned sick days, mostly public-sector workers and employees of large companies.

Fewer than one-third of workers are able to use an earned sick day to care for a sick child.

Polls suggest that about four out of five Americans believe that paid sick days should be a basic worker’s right, guaranteed by the government.

With this kind of public support, sick leave has become a battleground topic during the 2013 mayoral election. A law has been proposed in the City Council requiring compensated sick leave for any company employing five or more workers and Speaker Quinn is being pressured to act.

Connecticut: Only Employers of 50 or more workers
One incentive for action is that there is a law requiring paid leave in Connecticut, effective in 2012. However, it is a very timid law, applying only to "service workers", working for employers with a payroll of 50 or more people. The New York City law would apply to employers of five or more people.

New Jersey: No Mandate
On the other side of New York City, New Jersey has no state law requiring private-sector employers to provide employees with paid or unpaid sick leave.
Larger employers tend to provide it, and the State of New Jersey courts enforce such agreements if written into contracts or employee handbooks.
But nearly half of workers in New Jersey (cited range of 1.2 to1.5 million workers) do not have the right to a single earned sick day.  By not having earned sick days, these workers are more likely to go to work sick, putting the health of their co-workers and public at risk.
Public-sector employees, meanwhile, receive 15 days' paid sick leave each year after the first year and may  accumulate sick leave from year to year, with no limitations.

This led to what was perceived as an abuse of sick leave allowance. School administrators were accumulating hundreds of thousands of dollars of sick leave. The state capped the cash they could take out at $15,000. The New Jersey Supreme Court  in 2012 upheld the state government’s right to impose this limit. Deciding the case of The New Jersey Association of School Administrators v. Schundler, the state’s highest court  ruled in a 5-0 decision in 2011:

We conclude that the Legislature had the authority to modify terms and conditions for future contracts for public employment in a manner that did not raise constitutional concerns.

The President of the New Jersey Business and Industry Association, Phil Kirschner, said  in 2011 that mandating paid sick leave for small businesses would have a "serious, negative effect" on them:

Most large firms already provide it, so it really is a small business issue. And most small businesses either can't afford to do it or don't have enough people to cover shifts that need to be covered or perform duties that need to be done. Small companies also tend to be more flexible on these matters, so not providing paid sick days doesn't mean they don't accommodate employees when they're sick.

Posted by John Tepper Marlin at 5:02 AM No comments:

The New York Times this morning has a story by Vivian Yee on the issue of paid sick leave.

On Sunday morning, March 24, at 8 am, MSNBC host Chris Hayes is hosting a round table with several Democratic mayoral candidates.

He says the norovirus has been spread in NYC by food workers, because 80 percent don't have paid sick leave days (see Politicker at http://bit.ly/16PAZLm.)

Speaker Chris Quinn has a scheduling conflict and can't make the event. But her office has done some good research on paid sick leave issues. The research should be in front of the discussion even if she can't make it. For example, a simulation shows that there is a big drop-off – from 9 percent to 2 percent – in the risk of multiple absences (5 percent of employees or more) with 20 or more employees, assuming five days' sick leave per year.

This suggests that the legitimate concerns of small businesses can be addressed by exempting firms with fewer than 20 employees. That would cover 72.7 percent of all NYC employees, based on NY state data on size of establishments, 2011 data. In Connecticut, the cutoff is 50 employees, but this seems unnecessarily high, since it would exclude 56.8 percent of employees assuming the same size distribution of companies.

In New Jersey, the percentage of workers covered falls only from 83 percent to 80 percent by reducing coverage from establishments of fewer than 10 employees to firms of fewer than 20 employees, so it has many fewer establishments in the 10-19 employee range than New York State..
Posted by John Tepper Marlin at 9:00 AM No comments:

John Tepper Marlin
I write about the biographical and economic threads in history. Special interests include symbols of family, such as coats of arms, and the behavior of families in a crisis.
Newer Posts Older Posts Home
Subscribe to: Posts (Atom)